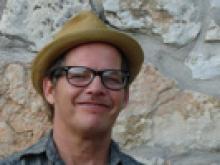 Erik Hokkanen was born and raised in Florida.  At age 18, he won the Florida Fiddle Championship and has been recognized many times throughout the past years and continues to receive recognition for his extreme talent.

In 1984, at age 21, Erik moved to Austin and started playing music with Gary P Nunn, Junior Brown, and many others.  In the late 1980’s he recorded 2 albums with his own band, Erik & The Offbeats.  Erik began touring Internationally in 1986.

Erik was named Kerrville Instrumentalist of the year in 1993, 1994, and 1995 and inducted into the Kerrville Folk Music Hall of Fame in 1996.  He was a Professor at Sibelius Academy in Helsinki, Finland in 1998.  His most recent award in 2009 is his Induction into the Texas Western Swing Hall of Fame.

Erik has played Cargnegie Hall, has a dozen albums out under his own name, and has toured Scandanavia & Europe over a dozen times.  He frequently plays gigs with the Austin Cajun Aces and rightfully so “steals the show” with his extreme talent and showmanship.  He now lives in Austin and has a son Luke.

You can buy from CD Baby or contact Charles directly through the contact form to obtain a copy.